How to Plan Mammography Exams Around COVID-19 Vaccines

How to Plan Mammography Exams Around COVID-19 Vaccines

Now that mass vaccinations against COVID-19 are underway, Desert Imaging has issued new guidance in accordance with the Society of Breast Imaging (SBI) on how to coordinate mammography exams for patients who plan to receive or have recently received a Covid-19 vaccine.

According to the SBI, “women with a recent COVID-19 vaccine may present for diagnostic workup for newly palpable axillary adenopathy or have new axillary adenopathy identified on routine screening mammography or ultrasound.” In other words, the lymph nodes located under the arm may enlarge on the side in which the vaccine was injected as a natural immune system response. The lymph nodes are part of the white blood cells or infection fighting system of the body. Vaccines of all types can result in temporary swelling of the lymph nodes, which may be a sign that the body is making antibodies in response as intended.

However, the detection of the enlarged lymph nodes may result in additional imaging to make sure everything is in order. To reduce the probability for additional imaging, Desert Imaging’s guidance to Mammography patients is as follows:

Desert Imaging strongly encourages our patients and the El Paso community to receive a COVID-19 vaccination as soon as one becomes available to them. We are happy to adjust our imaging schedules to accommodate the needs of our patients and to deliver the most accurate imaging results as possible. Please feel free to contact us at (915) 577-0100 or www.DIELP.com if you should have any questions or concerns. 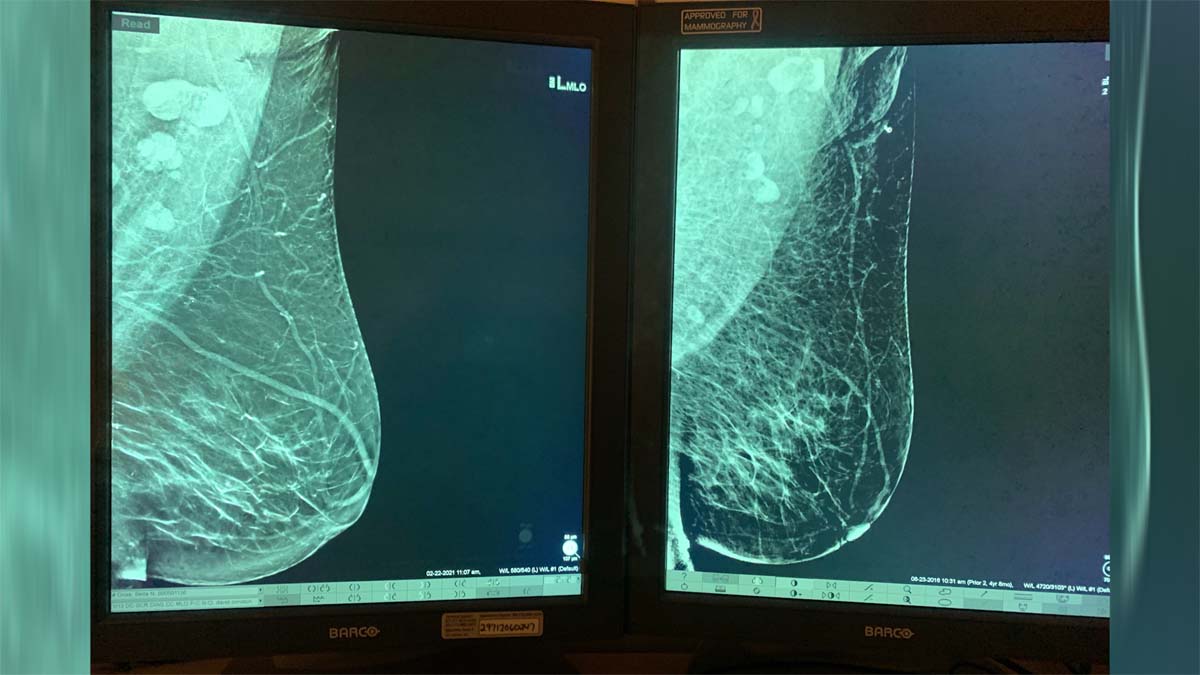 At Desert Imaging, we provide peace of mind during your entire mammography or imaging experience. Our compassionate staff creates a warm and welcoming environment to ease the anxiety often associated with getting a mammogram. Our team at our Desert Imaging is highly trained clinically but are also trained in the art of putting patients at ease. We do everything possible to make each experience an exceptional one.

The accuracy provided by our breast health experts and state-of-the-art technology is increased by the specialized breast expertise of our dedicated staff. Our caring and compassionate team provides personalized, attentive care for everyone who walks through our doors. Understanding that waiting for your results is also part of the experience, we strive to make your wait as short as possible. Results are delivered via secure fax to your provider, usually within 24 to 48 hours. 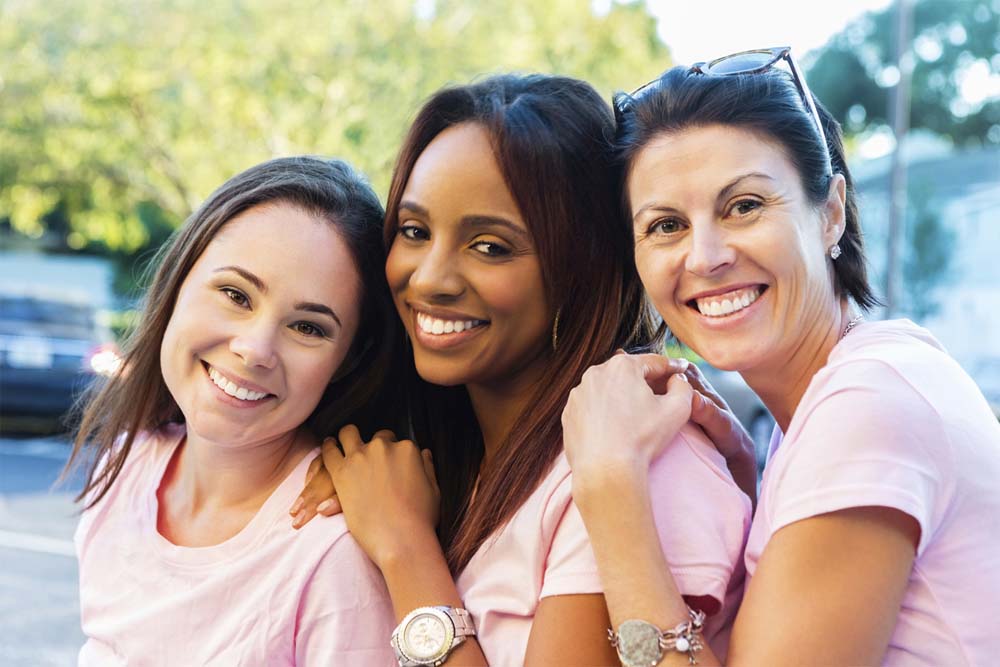 The Importance of the 3D Mammogram 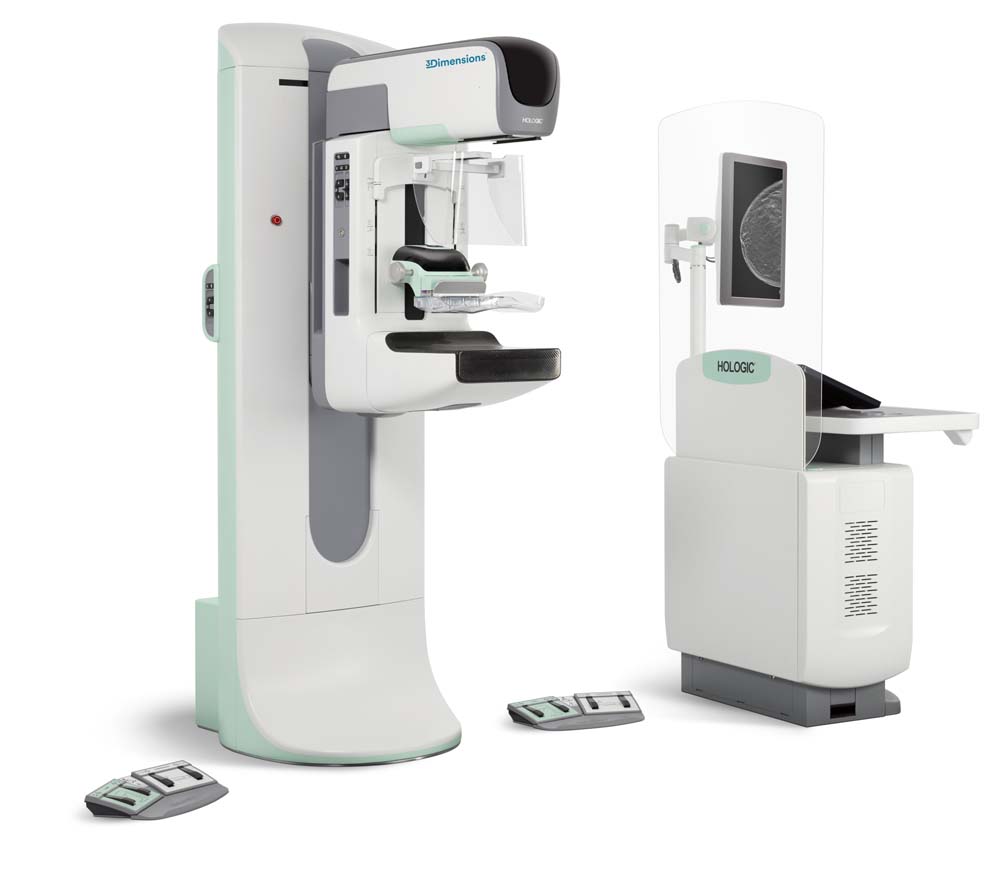 A conventional x-ray examination of the breast, called a mammogram, is two-dimensional (2D): two x-ray images are taken of the breast, from top-to-bottom and from angled side-to-side, while the breast is compressed between a clear plastic paddle and an imaging detector. Although compression is necessary to obtain breast images, it may cause overlapping of the breast tissue in which abnormal tissue can be hidden and superimposed normal tissue can appear abnormal. 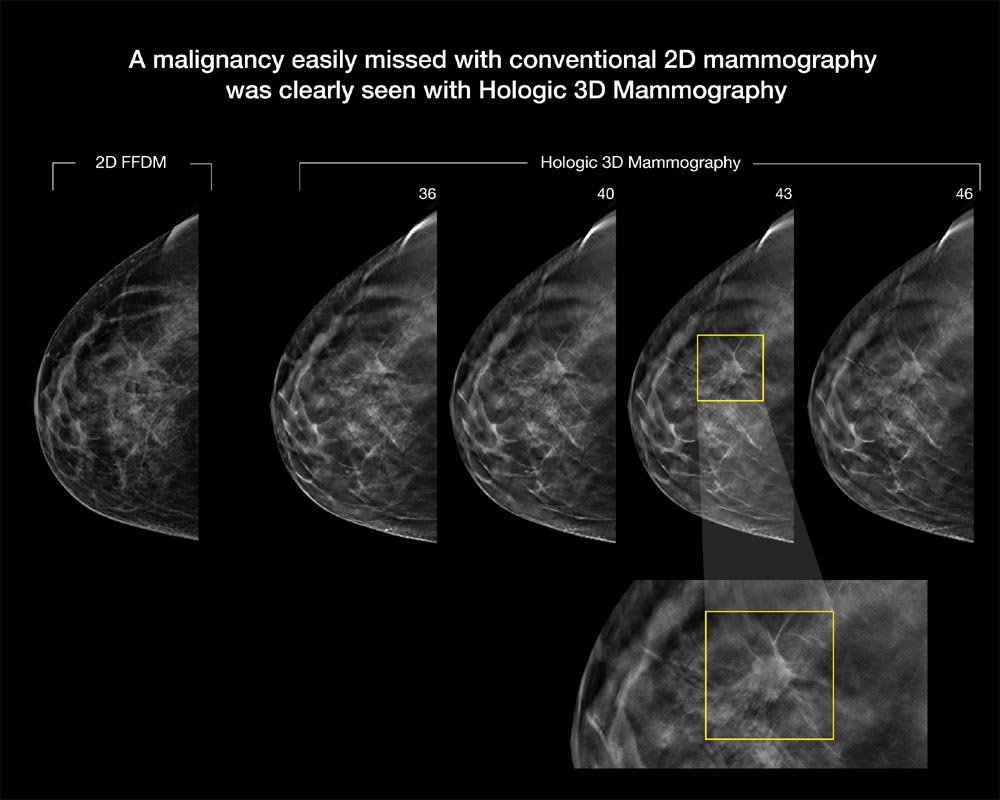 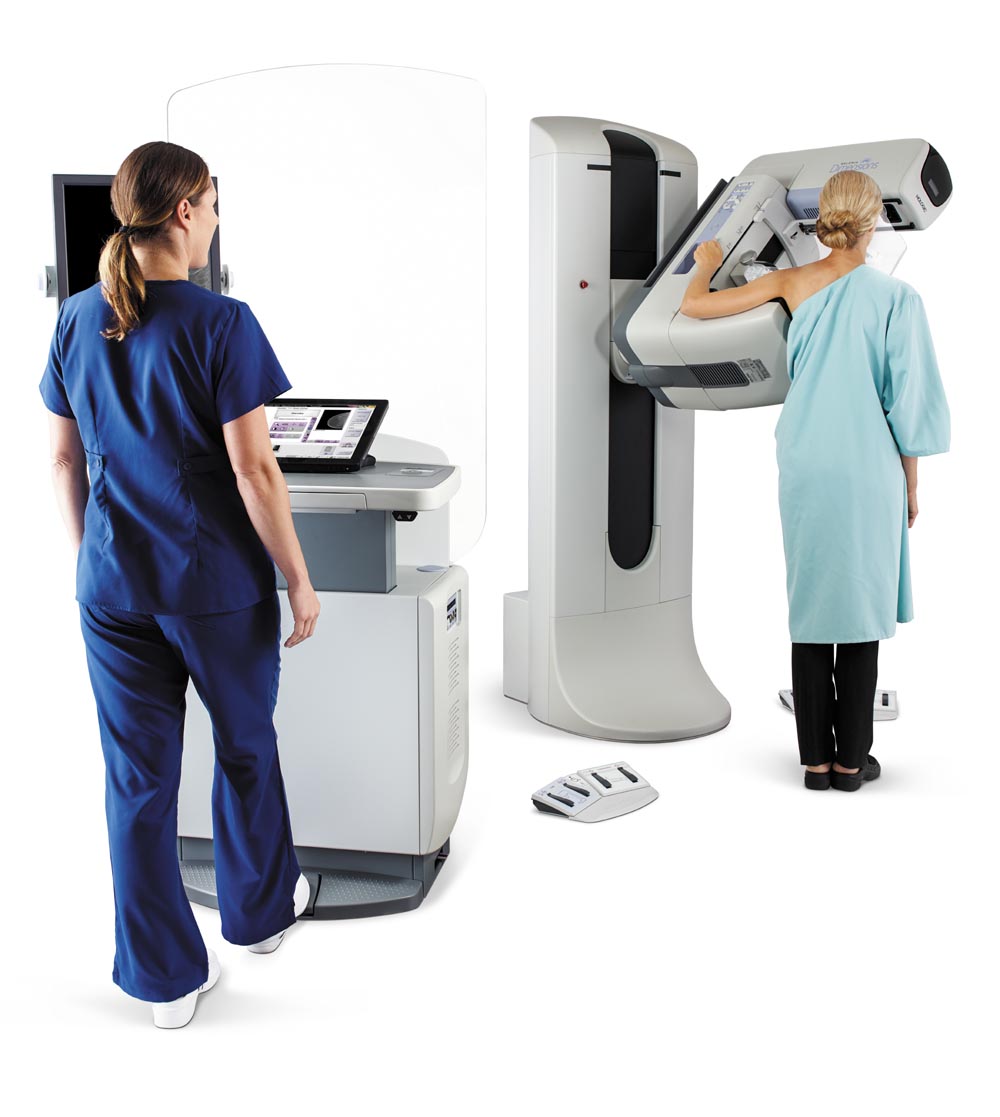 Breast tomosynthesis is an advanced form of breast imaging that uses a low-dose x-ray system and computer reconstructions to create three-dimensional images of the breasts. During this 3D exam, the x-ray arm sweeps in a light arc over the breast, taking multiple images. A computer then converts the images into a stack of thin layers, allowing the radiologist to review the breast tissue one layer at a time. This process minimizes the tissue overlap that can hide cancers or make it difficult to distinguish normal overlapping breast tissue from tumors. It also requires no additional compression and virtually the same imaging time as a conventional 2D breast cancer screening exam.

At Desert Imaging, we are all about Mammography. We only use full field digital mammography which is the Gold Standard because the image quality is unsurpassed. At Desert Imaging, all 3 stand alone locations and all our MOM Units, (Mammos on the Move, Mobile Mammogam Coaches) use Hologic Selenia.

Appointment
Mammos on the move

Most insurances cover mammography at 100%, no cost to you. The diagnostic mammogram, however, will be charged the copayment or the deductible. 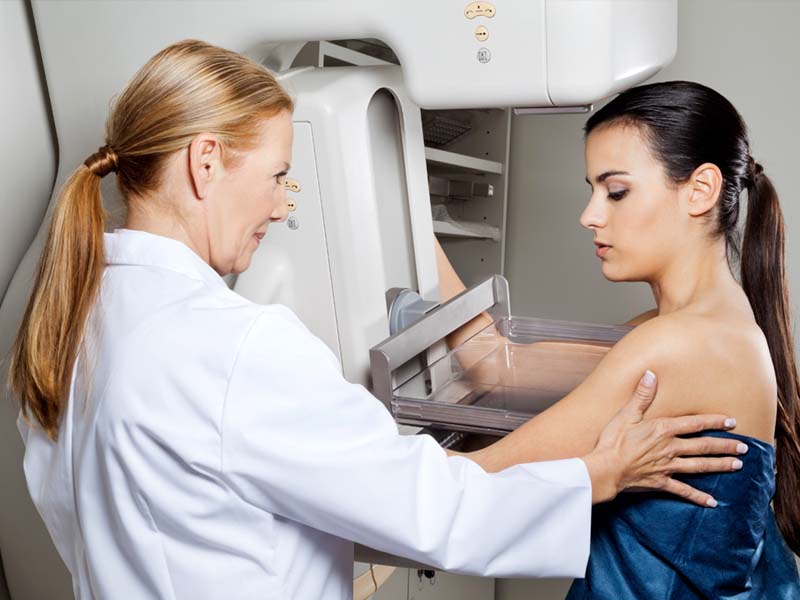 What is the difference between a screening mammogram and a diagnostic mammogram? 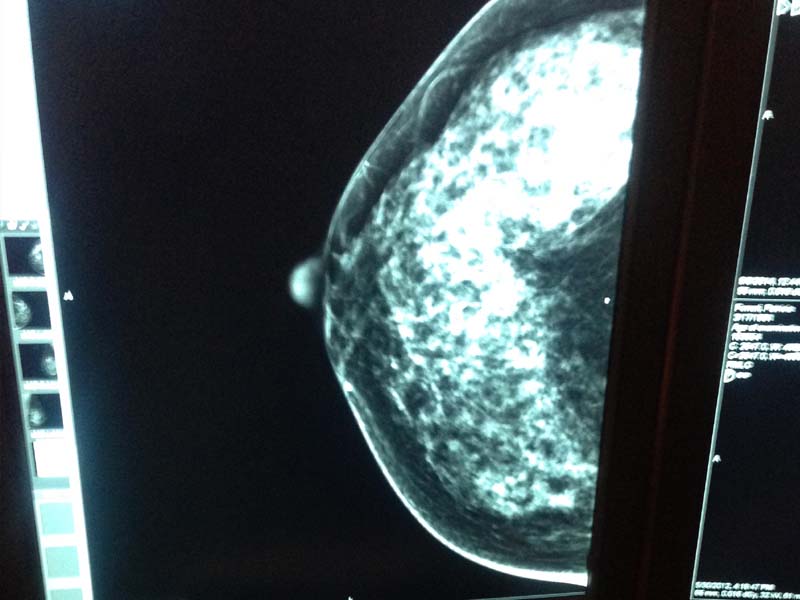 A diagnostic mammogram is needed if the radiologist needs to take a closer look at cysts, masses, or calcifications that look suspicious. These diagnostic images can help the radiologist tell if something is malignant or not. If they are still questionable, a biopsy might be ordered to look directly at the tissue.

What you should know about

What is Henda's Law & how does it affect my mammogram?

Henda's Law is the informal name for a House Bill passed by Texas Legislature that requires mammography providers to inform women that dense breast tissue can affect the accuracy of a mammogram in detecting breast cancer.The bill was initiated by Henda Salmeron, whose breast cancer went undetected because routine mammograms did not pick up the cancerous tumors hiding behind her dense breast tissue. Women, like Henda, who have dense breast tissue may benefit from supplemental screening.

Do I have dense breast tissue? 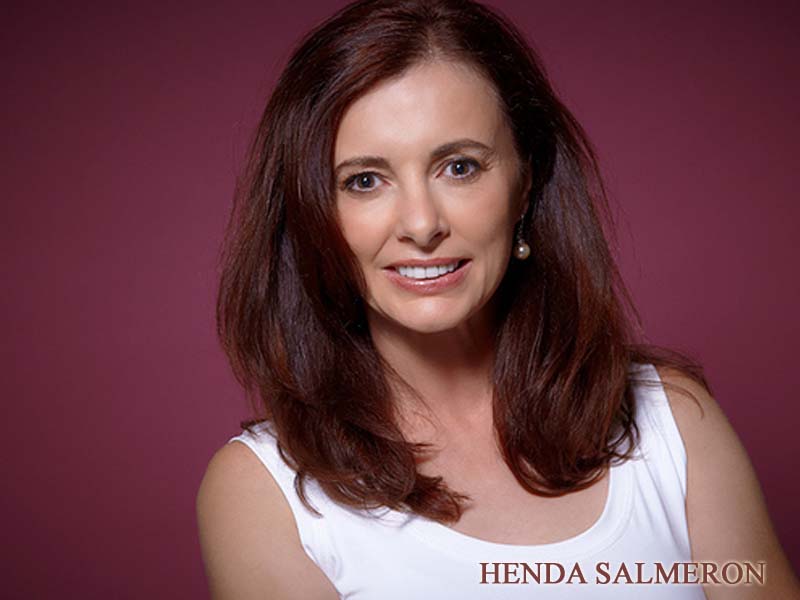 How will this affect my annual exam?

If a physician notices you have dense breast tissue, additional exams such as ultrasound may be ordered to rule out the possibility of any hidden tumors. However, it is important that you know insurance may not cover these additional screenings at 100%.

The American College of Radiology (ACR) came up with a standard way to describe mammogram findings and results. In this system, the results are sorted into categories numbered 0 through 6. This system is called the Breast Imaging Reporting and Data System (BI-RADS). Having a standard way of reporting mammogram results lets doctors use the same words and terms, which can help ensure better follow up of suspicious findings. These categories are used in the official report that goes to your doctor. Different wording may be used in the letters sent to patients. Here’s a brief review of the categories:

Additional imaging evaluation and/or comparison to prior mammograms is needed.

This means a possible abnormality may not be clearly seen or defined and more tests are needed, such as the use of spot compression (applying compression to a smaller area when doing the mammogram), magnified views, special mammogram views, or ultrasound. This may also suggest that the mammogram should be compared with older ones to see if there have been changes in the area over time.

There’s no significant abnormality to report. The breasts look the same (they are symmetrical) with no masses (lumps), distorted structures, or suspicious calcifications.

The radiologist describes a finding to be benign, when he/she sees benign, non malignant, structures such as, calcifications, lymph nodes in the breast, benign cysts or calcified fibroadenomas. This ensures that others who look at the mammogram will not misinterpret the benign finding as suspicious. This finding is recorded in the mammogram report to help when comparing to future mammograms.

Findings do not definitely look like cancer but could be cancer. The radiologist is concerned enough to recommend a biopsy.

The findings look like cancer and have a high chance (at least 95%) of being cancer. Biopsy recommended.

This category is only used for findings on a mammogram that have already been shown to be cancer by a previous biopsy. Mammograms may be used in this way to see how well the cancer is responding to treatment. Some cancers are often made to shrink using chemotherapy to later be removed by a surgeon.

Information from ACR, American College of Radiology, and the American Cancer Society.

The National Cancer Institute (NCI) adds that women who have had breast cancer and those who are at increased risk due to a genetic history of breast cancer should seek expert medical advice about whether they should begin screening before age 40 and about the frequency of screening.

What is Full Field Digital Mammography?

Digital mammography is a mammography system in which the x-ray film is replaced by solid-state detectors that convert x-rays into electrical signals. These detectors are similar to those found in digital cameras. The electrical signals are used to produce images of the breast that can be seen on a computer screen. Full field digital mammography is now considered the gold standard due to resolution being so much better than any other past screening method.

How should I prepare?

Do not wear deodorant, talcum powder or lotion under your arms or on your breasts on the day of the exam. These can appear on the mammogram as calcium spots. Describe any breast symptoms or problems to the technologist performing the exam. If possible, obtain prior mammograms and make them available to the radiologist at the time of the current exam.

How is the procedure performed?

Mammography is performed on an outpatient basis. During mammography, a specially qualified mammography technologist will position your breast in the mammography unit. Your breast will be placed on a special platform and compressed with a paddle (often made of clear Plexiglas or other plastic). As soon as the image is taken, the compression is released. This means minimum discomfort for patients. The examination process should take about 10 minutes.

What is the difference between a Screening Mammogram and a Diagnostic Mammogram?

The Screening Mammogram uses 4 images, two of the right breast and two of the left breast. The radiologist can determine if a mammogram is negative or benign. Negative means that there are cysts or nodules that are not malignant.If the radiologist sees something on the mammogram that is questionable, a Diagnostic Mammogram may be recommended. The Diagnostic Mammogram is composed of additional images. The radiologist may order a magnification view or a compression view to see if the questionable abnormality disappears. If it remains, the radiologist may order a breast biopsy or another mammogram in 3 or 6 months. Additional imaging such as a Breast MRI may also be recommended depending on the mass seen.

How often should a mammogram be performed?

You should have your first mammogram at age 40 and every year thereafter.If you are younger than 40, your doctor may send you for a mammogram if you have family history of breast cancer, a breast lump, or a positive genetic test called BRCA.Breast cancer does not care about how old you are.
Preparing for your appointment